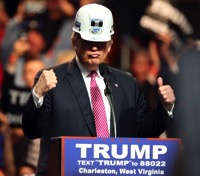 The Washington Post has talked to delegates who are part of a group of “dozens” who are looking to save the party by stopping Trump.

“This literally is an ‘Anybody but Trump’ movement,” said Kendal Unruh, a Republican delegate from Colorado who is leading the campaign. “Nobody has any idea who is going to step in and be the nominee, but we’re not worried about that. We’re just doing that job to make sure that he’s not the face of our party.”

The fresh wave of anti-Trump organizing comes as a growing number of Republicans have signaled that they will not support Trump for president. In addition, House Speaker Paul D. Ryan (R-Wis.), who is slated to chair the Republican National Convention next month in Cleveland, said in remarks released Friday that House Republicans should “follow their conscience” on whether to support Trump.