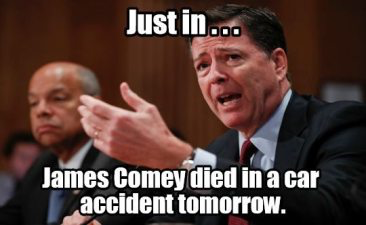 We are currently engaged in a culture-wide race to the conclusion of a reductio ad absurdum.

Think of it this way. Back in the Bill Clinton era, there were always stories of the “trail of bodies.” If you gave any credence to them at all, you were a nut, a conspiracy theorist, a true head case. One of the ways I knew that Hillary Clinton was finished is that the “trail of bodies” meme went from a strident outside case against them to a cynical inside joke. It no longer had to be believed — it just had to be believable.

In the first Clinton era, if you referred to it at all you would be shouted down angrily. In the second Clinton era, when James Comey suspended his second review of Hillary’s emails, the memes appeared instantly. “I discontinued searching her emails when I found my own suicide note.” And there was no high indignation.

What this does is tell you how much “juice” there is in a movement. When everybody gets the joke, you are in trouble.

We are in a similar place when it comes to radical Islam.