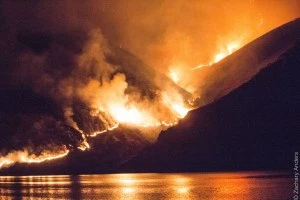 It looks like any criminal case against the men who voluntarily admitted to starting the Snake River Fire will likely be handled in Garfield County.  The Whitman County Sheriff’s Office is investigating what started the massive blaze which burned over 11,000 acres in both counties.  Three college aged males voluntarily came forward and allegedly told Sheriff Brett Myers that they had a small campfire the night before the blaze erupted.  They pinpointed the spot on the Garfield side of the river across from Granite Point which is where witness saw the flames break out on Tuesday of last week.  Sheriff’s deputies have used jet skis to investigate the location.  They plan to forward their case to both the Whitman and Garfield County Prosecutors next week.  Sheriff Myers expects the case to be handled by Garfield County out of Pomeroy since that is the jurisdiction where the fire started.  The Snake River Fire was contained over the weekend.  No one was hurt.