How badly do the Dems want war to distract everyone from the economy? 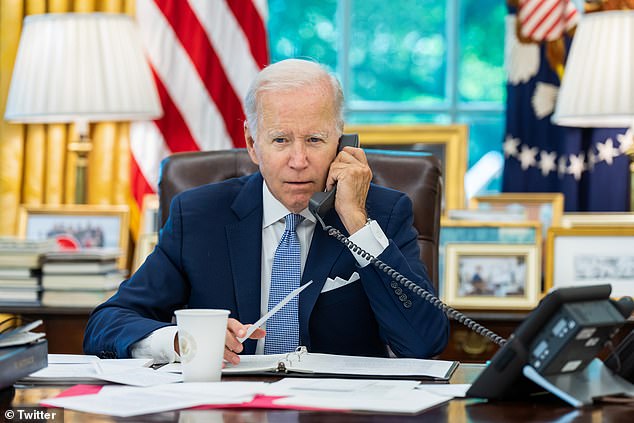 China’s President Xi Jinping warned Joe Biden ‘those who play with fire will get burned’ during a two-hour call Thursday morning amid rising tensions over Taiwan, according to Chinese state media.

The fifth call between the world leaders since President Biden took office comes amid simmering tensions and a potential impending visit to Taiwan from House Speaker Nancy Pelosi.

Biden released an image on Twitter of him in the Oval Office on the phone with Xi.

‘Today I spoke with President Xi Jinping of the People’s Republic of China as part of our efforts to deepen lines of communication, responsibly manage our differences, and address issues of mutual interest,’ he wrote along with the image.

The last time Biden and Xi last spoke was in March of this year – shortly after Russia invaded Ukraine.

Chinese state media released some excerpts from the call, including Xi telling Biden: ‘Those who play with fire will only get burnt. Hope the U.S. side can see this clearly.’

The leader of the People’s Republic of China also said he firmly opposes Taiwan independence and the interference of external forces.

On the other hand, Biden expressed the U.S. stance on the issue has not changed, according to a read out of the meeting.

‘Play with fire and you will get burned’: China’s Xi’s warning to Biden on Taiwan in two-hour call | Daily Mail Online