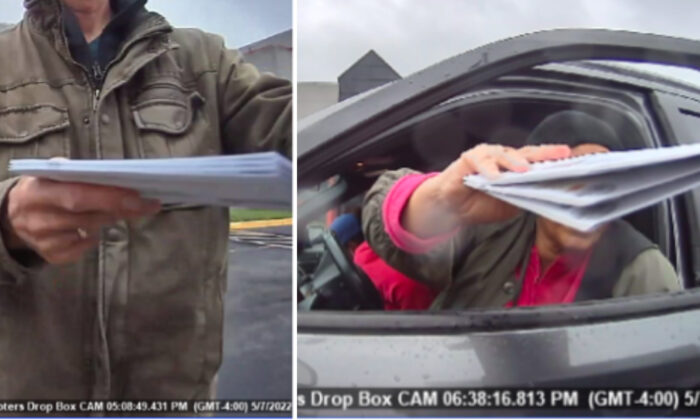 A conservative legal group is suing the board of elections in Pennsylvania’s Chester County, citing surveillance camera footage that captured the illegal use of ballot drop boxes.

The lawsuit was filed Thursday by America First Legal (AFL) on behalf of registered voters in Chester County. The group, founded by longtime Donald Trump adviser Stephen Miller, said this is meant to ensure that the board adheres to Pennsylvania’s election law regarding ballot drop boxes prior to this November’s election.

Under Pennsylvania’s election code, mailed and absentee ballots have to be returned either by mail or in person by the person to whom the ballot belongs, meaning one person cannot drop more than one ballot in a drop box.

During the May primary election, the Chester County Board of Elections placed 13 drop boxes. An instruction attached to each box by the board explicitly said that “you must only return your own ballot,” and that “you are prohibited from delivering or returning anyone else’s ballot, even if that person is your spouse, parent, child, grandparent, other relative, neighbor, or friend.”

However, only 11 of all 13 boxes were physically watched by a staff member and were only accessible at certain hours of the day, according to the complaint. The other two boxes, which were accessible 24 hours per day, remained unstaffed but monitored with surveillance cameras.

The surveillance camera footage, obtained through a Right-to-Know request from the board, showed multiple instances of individuals delivering more than two ballots. Together, some 300 individuals had dropped “invalid and void ballots” at that location, according to the AFL.