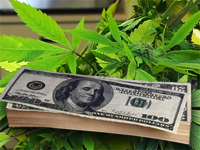 Oregon has processed $25.5 million in tax payments from recreational marijuana from January through the end of July.

The state’s Department of Revenue says medical marijuana dispensaries were required to file their second-quarter returns for recreational marijuana by Aug. 1.

But it can only be sold by medical marijuana dispensaries until the Oregon Liquor Control Commission finalizes rules for the new industry. That’s expected to happen by next year.

The expected amount rose from $8.4 million to $35 million.

Recreational marijuana is illegal in 46 states and under federal law.