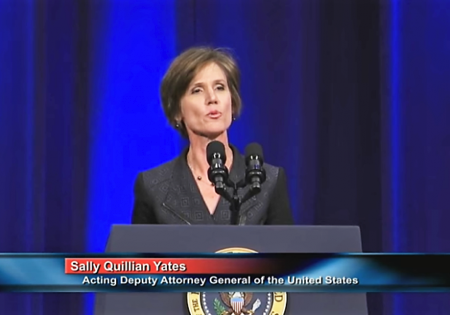 Via CNN, Justice Department will not defend executive order on travel restrictions:

The acting Attorney General Sally Yates has told Justice Department lawyers not to make legal arguments defending President Donald Trump’s executive order on immigration and refugees, according to sources familiar with the order.

Yates, an Obama appointee who is serving until Trump attorney general nominee Jeff Sessions is onfirmed, does not believe the substance of the order is lawful, according to the sources….

Currently, there are cases filed in at least five states including Virginia, New York, Massachusetts, ashington and California that are challenging Trump’s order.

The NY Times quotes the directive:

“I am responsible for ensuring that the positions we take in court remain consistent with this institution’s solemn obligation to always seek justice and stand for what is right,” Ms. Yates wrote in a letter to Justice Department lawyers. “At present, I am not convinced that the defense of the executive order is consistent with these responsibilities nor am I convinced that the executive order is lawful.”

The decision is largely symbolic — Mr. Trump’s nominee to be attorney general, Jeff Sessions, is likely to be confirmed soon — but it highlights the deep divide at the Justice Department and elsewhere in the government over Mr. Trump’s order.

Mr. Trump has the authority to fire Ms. Yates, but as the top Senate­ confirmed official at the Justice Department, she is the only one authorized to sign foreignsurveillance warrants, an essential function at the department.

“For as long as I am the acting attorney general, the Department of Justice will not present arguments in defense of the executive order, unless and until I become convinced that it is appropriate to do so,” she wrote.

The Democrats are delaying my cabinet picks for purely political reasons. They have nothing going but to obstruct. Now have an Obama A.G.