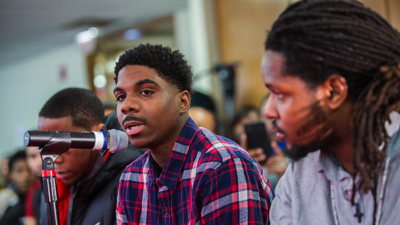 47% of black men in Chicago aged 20-24 are not working or going to school. Via the Chicago Tribune:

Nearly half of young black men in Chicago are neither in school nor working, a staggering statistic in a bleak new youth unemployment report that shows Chicago to be far worse off than its big-city peers.
…

Forty-seven percent of 20- to 24-year-old black men in Chicago, and 44 percent in Illinois, were out of school and out of work in 2014, compared with 20 percent of Hispanic men and 10 percent of white men in the same age group, according to the report from the University of Illinois at Chicago’s Great Cities Institute.

The numbers for black men are far worse in Chicago and Illinois than elsewhere in the country. In Los Angeles and New York City, 31 percent of black 20- to 24-year-old men were out of school and out of work, in line with the national average of 32 percent.

While declines in youth employment across all races have raised concerns for a number of years, the new report puts into stark focus the connection between unemployment and Chicago’s racially segregated neighborhoods that also are home to high rates of poverty and crime.

“Conditions of joblessness are chronic, concentrated and comparatively worse than elsewhere in the country,” said Teresa Cordova, director of the Great Cities Institute. She called the prevalence of jobless among black males “definitely at crisis proportions.”