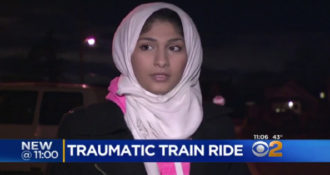 Progressives say: it doesn’t matter that the story is false. But that it could have been true.

Fortunately, she was arrested for filing a false police report

According to Yasmin Seweid, a business student at Baruch College in Manhattan, nobody else on the train came to her aid during the incident.

The 18-year-old told the New York Daily News that she had just left an event on campus Thursday night when three men approached her on an uptown 6 subway near the 23rd Street stop.

They yelled President-elect Donald Trump’s name over and over, and said to her, “Look, it’s a f***ing terrorist,” Seweid said in a Facebook post on Friday.

She said they also yelled, “Get the hell out of the country!” and, “You don’t belong here!”

Seweid was born in Williamsburg, Brooklyn, to Egyptian immigrant parents, she told the Daily News.

She said when she asked the men, who appeared to be intoxicated, to stop bothering her, they laughed and continued as other riders looked on.

Seweid moved to the end of the train, but they followed her and attempted to pull off her hijab while yelling, “Take that thing off!”

In her Facebook post, Seweid wrote about her disappointment that nobody on the train intervened when the men began to attack her.

“It breaks my heart that so many individuals chose to be bystanders while watching me get harassed verbally and physically by these disgusting pigs,” she wrote.

“Trump America is real and I witnessed it first hand last night! What a traumatizing night,” she added.