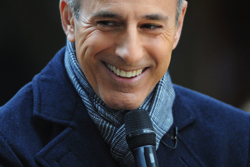 The first joint candidate appearance is less than a week away, and ahead of the big event/dumpster fire, NBC is announcing that one of its top hosts, Matt Lauer, will be the moderator. It will be the first time Donald Trump and Hillary Clinton have been on the stage together this election cycle. Via Deadline:

The one-hour event will simulcast live at 8 PM ET on the NBC broadcast network and MSNBC, and stream live on NBCNews.com.

Ratings for these eventsare expected to actually be pretty good, if the primaries are anything to go by. Trump’s existence in the race has been good for political coverage ratings overall, and a big event like this will draw some good viewership.