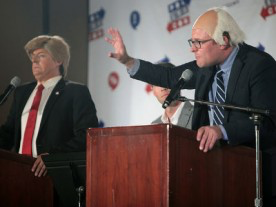 These comments echo my own on the partisan hypocrisy and how the partisans have politicized their conscience.

Liberal commentators are aghast at President-elect Donald Trump’s bullying tactics to prevent American companies such as Carrier from leaving for cheaper climesTrump and Bernie elsewhere. But when it comes to similar behavior on the part of liberal heroes, especially Bernie Sanders, most on the left have not an unkind word to spare.

In fact, notes Reason Foundation Senior Analyst Shikha Dalmia, President Obama started the game of defending protectionism under the guise of economic nationalism. And Bernie has picked up the baton and is running with it. But you’ll hear not a peep of complaint from the Paul Krugmans of the world who are lambasting Trump’s undeniably bad ideas.