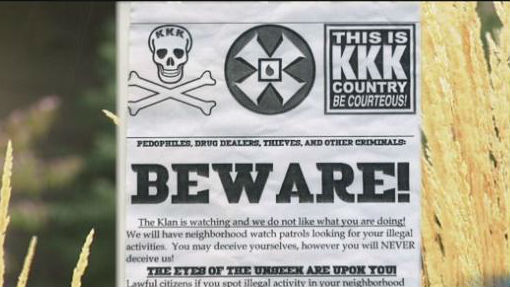 This is a follow-up to my previous post about KKK fliers in Ellensburg.

The KKK is back, and they’re recruiting more members in the Inland Northwest. That’s according to a member who called KHQ, from the Traditionalist American Knights Ku Klux Klan. KHQ reported this story in September, where the KKK left flyers on front doorsteps of homes in Hayden, Idaho. KHQ called them then to find out why they’re doing this, and the KKK finally called back.

In a phone interview, this member of the KKK would not give his full name, only said his name was Mr. Akia, which KHQ learned stands for A Klansman I Am.

“We are an organization that is basically a preservation society we’re a fraternal brotherhood, a fraternal order,” he said. “We believe in pure Americanism and freedom for all, but freedom comes at a price.”

KHQ asked him why his group put flyers on front doorsteps in Hayden that said the KKK is patrolling the neighborhood looking for illegal activity.

“It’s basically telling people that are in the shadows that are wanting to commit those criminal acts that we are lurking there as well,” he said.

He also said they’ve received a lot of calls about the flyers.

“In the northwest there is no Aryan nation there is no any other organization that are doing anything out here whatsoever. Now the Traditionalist American Knights is out here and we’re going strong,” he said.

Lt. Stu Miller with the Kootenai County Sheriff’s Office said homeowners do have options if they do not want to receive these kind of flyers in the future.

“The easiest thing you can do is throw it in the garbage,” said Miller. He added the KKK can legally put the flyers on your front step unless you have a no trespassing sign or “unless that person has a notice posted, verbal or written, to the offender saying ‘I don’t want your stuff.'” If the group puts another flyer by your door after you put out that notice, Lt. Miller said that would in violation of Idaho code 18-7029 and would be a misdemeanor. Click here for more information: https://legislature.idaho.gov/idstat/Title18/T18CH70SECT18-7029.htm