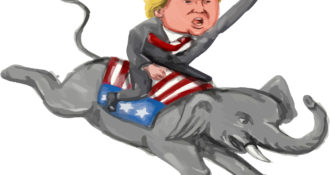 Trumpaphobia is the hatred or fear of Donald Trump and his supporters – be they white, black or Hispanic. This condition sometimes leads to acts of violence and expressions of hostility.

Trumpaphobia is not confined to any one segment of society, and can be found in people from all walks of life. Organized hate groups have viciously attacked Trump supporters and have used especially violent language, like racist, in attempting to persecute and intimidate them.

Discrimination against Donald Trump and his supporters comes in many forms. At times, Trumpaphobic beliefs lead people toward prejudiced actions at work, at schools, at clubs, and in many other areas as well.

Prejudiced views directed at Trump supporters often stem from the perception that Donald Trump is immoral. Trumpaphobia makes some people think that they are superior to all others, especially Republicans. In fact, studies show that anti-Trump bias is far more accepted among large numbers of Americans than is bias against other.

Many researchers claim that Trump supporters still find themselves the target of bias within institutions like public schools, universities, the media, and Hollywood.

Numerous examples can be seen such as the woman cornered at a Trump rally by a group of men and then having eggs thrown in her face. Senior citizens attacked for simply wearing a Trump tee-shirt. Screams of racist, anti-Latino, anti-women towards those who support Donald Trump for President.