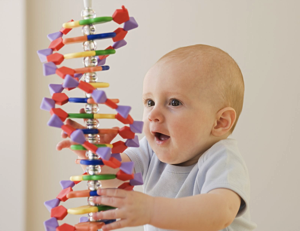 A donor egg was introduced to prevent passing on the mother’s mitochondrial disease.

It sounds like the setup of a wacky science fiction comedy, but this is actually real life. A five-month old baby boy was just revealed to be the first kid in the world with three biological parents, according to New Scientist. The infant was created by a technique that has only been legally approved in the UK, and it lets parents with genetic disorders have healthy babies. The study is believed to fast track progress in the field, and is the latest in a series of advances in genetic science we’ve seen recently.

The method used in this case was slightly different from the one legalized in the UK. Instead of fertilizing both the mother’s and a donor’s eggs with the father’s sperm and then replacing the donor’s nucleus with the mom’s, this scenario first swapped out the nucleus of a donor egg for the mother’s, then fertilized the resulting egg with the dad’s sperm. This prevented the destruction of two embryos, which the family involved were not supportive of for religious reasons.

Neither of the above techniques are allowed in the US, so the New York City-based doctor and his team went to Mexico to carry out the procedure. Five embryos were created, but only one developed normally and was implanted in the mother, who carries the genes for Leigh’s disease. Around a quarter of her mitochondria have the disease-causing mutation, according to New Scientist, and she had already lost her first two children to Leigh’s.

The three-parent technique was banned after it was last tried out in the 1990s, since the children born from that went on to develop genetic disorders. According to the Independent, critics have described the method as tantamount to playing God.