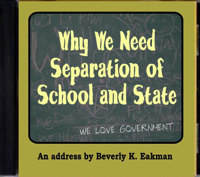 This is why we need the Separation of School and State.

Two politically connected vendors are suing the state of Idaho in federal court after Attorney General Lawrence Wasden demanded that they pay back all the money they were paid for the now-defunct Idaho Education Network, including millions paid for broadband services that Idaho schools used for up to six years.

The problem: Idaho law bans payments under a void contract. The Idaho Supreme Court declared the $60 million Idaho Education Network void in March, saying it was issued illegally.  And “void” means it was never legal in the first place.

But any changes to the law the panel recommends wouldn’t apply to the IEN lawsuits, which deal with Idaho’s existing law, which says, “All contracts made in violation of the provisions of this chapter shall be void. Any sum of money advanced by the state in consideration of a void contract shall be repaid forthwith.”

Idaho Department of Administration Director Bob Geddes, in a July 25 letter to Wasden, wrote that he interpreted “advanced” to mean pre-payments – payments made before services are rendered. But the Idaho Supreme Court’s unanimous ruling in the case, issued in March, suggested it referred to all payments made under the contract, saying the vendors were trying to “close the barn door after substantial funds had been advanced by the state.”

Idaho law, Chief Justice Jim Jones wrote for the court, “does impose an obligation on the proper officer of the state of Idaho to seek repayment of money advanced under the void” contract. “If the appropriate state officer fails to perform this statutory obligation,” he wrote, “the state’s chief legal officer can step forward to make the state whole for these unfortunate violations of state law.”

ENA and CenturyLink say they shouldn’t be asked to pay back money they received for providing services the state requested – services the state was happy with at the time. “The issues with the contract were the fault of the state and not ENA,” Phillip Oberrecht, attorney for ENA, said in a statement.