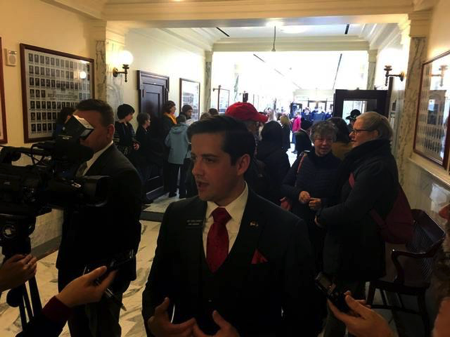 If cities don’t want to follow the law, pull their tax incentives. Let the people of the city pay for the illegal actions.

The measure sponsored by Rep. Greg Chaney, R-Caldwell, would effectively bar immigrant sanctuary-city policies and deny state sales tax revenue to any jurisdiction that adopted such a policy.

The bill was introduced in committee Monday. It follows a presidential executive order last week that threatens to deny federal funds to such jurisdictions.

“While Idaho is a wonderful place for refugees, immigrants of all types to move to, those that are seeking to avoid prosecution or deportation based on other criminal activities, we don’t want to become a magnet for those individuals,” Chaney said.

He said the bill does not seek to have local authorities police immigration violations.

“Sanctuary city” is a term broadly applied to localities whose policies limit local cooperation with federal immigration enforcement. Four states, 364 counties and 39 U.S. cities have some version of a limitation, according to the Immigrant Legal Resources Center. Idaho has none; Boise city officials say they have no plans to take such a step.

“Idaho is recognized as one of the safest states in the nation and our local law enforcement does a superb job,” House Minority Leader Mat Erpelding said in a statement. “This bill is a solution in search of a problem and will further marginalize those members who work hard to support their families.”