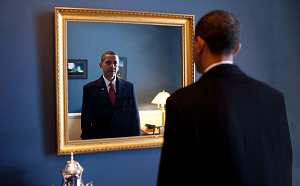 As I said previously: the Dems must have thought that Obama was ushering in the messianic presidency. Why would they have ever trumpeted his executive power grab? They must have known that Democrats wouldn’t be in power forever. Or did they?

President Obama once promised to “turn the page on the imperial presidency” and lead the most transparent administration of all time, yet he leaves the White House with the executive branch more empowered to wage war and act in secret than ever before.

In a new feature for the February 2017 issue of Reason, Gene Healy writes:

As Obama’s tenure comes to a close, it’s clear his has been a presidency of enormous consequence. But his most lasting legacy will be one few—perhaps least of all Obama himself—expected. He will leave to his successor a presidency even more powerful and dangerous than the one he inherited from Bush. The new powers he’s forged now pass on to celebreality billionaire Donald J. Trump, a man Obama considers “unfit to serve as president”—someone who can’t be trusted with his own Twitter account, let alone the nuclear launch codes. Perhaps only those incorrigible “cynics” Obama regularly chides from the bully pulpit could have predicted this would come to pass.