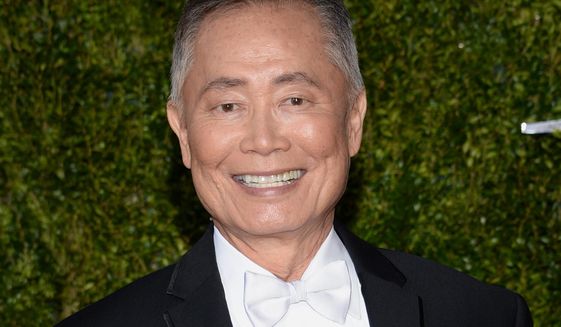 From The Washington Times:

Former “Star Trek” star and gay activist George Takei penned an op-ed for The Daily Beast Tuesday arguing that the First Amendment cannot be protected without limiting the Second, and calling for a “common-sense” ban on firearms “designed for mass slaughter.”

Mr. Takei wrote that the LGBT community is grappling with the notion that Sunday’s terrorist attack on the Pulse gay nightclub in Orlando “was inspired by religious fanaticism.”

“No one on either side of the political divide is particularly comfortable with this narrative,” he argued. “But the moment does offer an uncanny opportunity, an alignment almost never seen, where elements on the farthest sides of the cultural spectrum suddenly find common cause.

“For the average American, it is the First Amendment that articulates many of our most basic and fundamental civil rights: freedom of speech and of worship, but also of assembly and association,” he continued. “On Sunday, the latter two rights came under direct assault for the LGBT community. There is little doubt, for instance, that the killer targeted his victims out of hate. He intended to strike not just at people, but at a closely-knit community. After all, if his goal were sheer bloodshed and horror, Orlando boasts far more tempting and, some might even argue, more ‘sympathetic’ targets.”

Mr. Takei wrote that the constitutional right for citizens to own, purchase and sell “semi-automatic firearms” conflicts with their right to peaceably assemble “without undue fear of being targeted or killed.”

“We appear to face a choice, because one freedom seemingly cannot be protected without limiting the other,” he argued. “Assuming the threat we face now comprises heavily-armed, homegrown religious fanatics bent on inflicting massive casualties, the logical solution is to render them less armed and less fanatical. Restricting their ability to obtain dangerous weapons domestically thus is as vital as diminishing and destroying their bases and influence overseas.”

“Like it or not, this history and this obligation have been thrust upon us, and we must now rise to its challenge,” he concluded. “For if there is one group in this country with more will, more experience, and more tenacity than the NRA, it is the LGBT community. You don’t want to mess with us.”