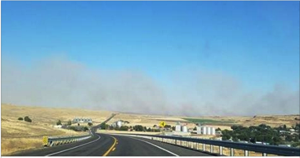 A lightning sparked wildfire near Washtucna has torched 25,000. State mobilization for what is now being called the Palouse Falls Fire burning in Franklin County was granted Sunday night. That means crews from around Washington are arriving to the scene to battle the massive fire. The blaze started Sunday by lightning and is threatening homes, crops, farms a fish hatchery and State Route 26. Flames did force the Washington State Patrol to shut down the highway a few hours late Sunday afternoon near Washtucna. No homes have been lost and there are no evacuation orders in effect.