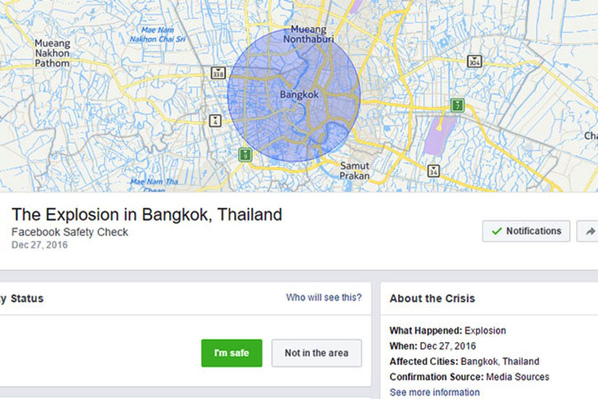 So much for Facebook’s fixing the Fake News.

Facebook got fooled by its own algorithm. Today, the social network falsely activated its Safety Check feature after a flood of fake news suggested that there was an explosion in Bangkok, Thailand.

Users in the country saw an alert to mark themselves safe, but saw little details about when or where in Bangkok the “explosion” occurred. Safety Check came on at around 9PM local time and was deactivated about an hour later. News that “reported” the explosion linked back to a story on Bangkok Informer that was published in 2015 about the Erawan Shrine bombing.

The “source” of the @Facebook Safety Check for Bangkok: A fake news site that scrapped stuff from elsewhere…! pic.twitter.com/i6Q2k8XBxP

Facebook announced in November that its Safety Check feature will be triggered by an algorithm that looks at trending news and posts by users in that area. At the time, I spoke to Peter Cottle, a Facebook engineer who helped create Safety Check, about the possibility of false positives. Cottle assured that the algorithm uses third party enterprise software to fact check the news before turning Safety Check on.

This isn’t the first time Safety check was erroneously turned on; in March, Facebook alerted users in the US, UK, and other countries to mark themselves safe after a bombing in Pakistan.