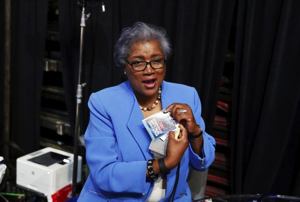 Donna Brazile resigns from CNN after it is discovered she passed debate questions to Hillary Clinton.

CNN quietly cut ties with Donna Brazile, the acting Democratic National Committee chair and a longtime contributor on the cable news network, after hacked emails published by WikiLeaks revealed that she had provided questions to the Hillary Clinton campaign in advance of a town hall and debate hosted by CNN during the Democratic primary.

According to a spokeswoman for the network, CNN accepted Brazile’s resignation on Oct. 14.

The emails showed that Brazile — whose role as a CNN contributor was suspended in July after she took over for departing DNC chair Debbie Wasserman Schultz — shared with the Clinton campaign a question that would be posed to Clinton before the CNN Democratic Debate in Flint, Mich., in March, and another before a CNN town hall in Columbus, Ohio, a week later.

“CNN never gave Brazile access to any questions, prep material, attendee list, background information or meetings in advance of a town hall or debate,” the spokeswoman, Lauren Pratapas, said in a statement. “We are completely uncomfortable with what we have learned about her interactions with the Clinton campaign while she was a CNN contributor.”

Brazile has appeared as a guest on Yahoo News’ live coverage of campaign events, including the recent presidential debates, but was not paid for any of those appearances.

Brazile did not respond to a request for comment.