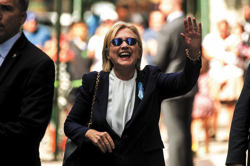 Hillary Clinton’s stumbles as she left Sunday’s 9/11 memorial ceremony put her health at the forefront of a presidential campaign in which the two major party nominees are among the oldest ever and have disclosed a limited amount of information about their medical history.

The Democratic presidential nominee “felt overheated” and left the ground zero ceremony after about 90 minutes, her campaign said. A video of her departure show Clinton appearing to stumble as three staff members hold her up and help her into a van.

While the former secretary of state later emerged from her daughter’s nearby apartment, saying she was “feeling great,” the episode focused attention on Clinton’s health with eight weeks remaining in a contentious election in which Republican rival Donald Trump has sought to sow doubt about her health and fitness to serve.