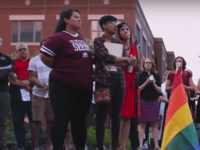 A Black Lives Matter activist hijacked the Orlando vigil held on Monday, using the microphone opportunity to lambast the white attendees who were mourning the terrorist attack that took place last Sunday in Florida.

“I was really nervous to get up here because there’s a lot of white people in the crowd” said the activist, while audience members nervously laughed. “That wasn’t a joke” she added.

The activist, who would better be described as a protester, then went on to complain about racial tensions in America and belittle the audience that was grieving for the loss of nearly 50 lives.

“As much as it’s awesome that so many people are here today, it’s like who are you really here for” she continued.

One audience member replied that they were there for everybody, before a large round of applause, before another shouted “we are here to be uniting, not dividing, which is what you are doing now” to the protester, before a large group of attendees started shouting at the man for criticising her.

“They’re segregating us” complained one gay attendee in an interview to the College Fix. “Right there on stage they’re segregating us… They are making this a racial issue. It’s not a racial issue… I expected a community to come together, everyone, and I’ve got someone on stage trying to make it all about her culture, and divide the rest. That’s not what this is about.”