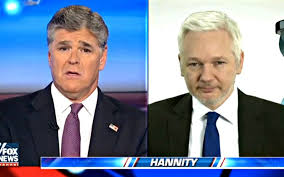 In an interview with Sean Hannity, Julian Assange says that the DNC/Podesta Emails were not given to WikiLeaks from Russia.

Who ya’ gunna believe?

It won’t be the first time Julian Assange was interviewed and asked whether the source of the hacked DNC and Podesta emails was Russia; however, it will be the first time everyone pays attention to his answer. Recall that the first such interview of Assange – when the question of who had sourced Wikileaks with the hacked emails came up – took place exactly two months ago, on November 3. Back then, in an interview televized by RT, John Pilger explicitly asked Asange where the emails in question had come from.

Assange’s response was straightforward: “The Clinton camp has been able to project a neo-McCarthyist hysteria that Russia is responsible for everything. Hillary Clinton has stated multiple times, falsely, that 17 US intelligence agencies had assessed that Russia was the source of our publications. That’s false – we can say that the Russian government is not the source.”

That particular interview took place when Trump has losing badly in the polls, and as such few people paid attention: after all, what difference did it make who had leaked the Podesta emails: Hillary Clinton was assured to win (with a 90%+ probability according to the NYT and other “non-fake news” outlets).

Needless to say, the issue of Russian hacking has since come back with a vengeance, and culminated last week with Obama expelling 35 Russian diplomats in the greatest diplomatic escalation between the US and Russia in decades; an action which took place based on a flimsy 13-page DHS/FBI report which demonstrated that anyone could have hacked the DNC emails if only they spent a few dollars to purchase a piece of Ukranian PHP malware.

Which is why many more will pay attention to Assange’s next interview with Sean Hannity, which will air Tuesday on Fox News. According to a Fox News release, the two will discuss Russian hacking, the 2016 presidential election, and both the Obama and upcoming Trump administrations. It will air at 10 p.m. on Jan. 3, with additional portions of the interview airing throughout the week. As Variety adds, The interview will mark Assange’s first face-to-face cable news appearance. It is not, however, the first time he’s spoken publicly to Hannity. Most recently, in December, Assange called into Hannity’s radio show, in which the host gushed to Assange that “you’ve done us a favor” in exposing gaps in U.S. cybersecurity.