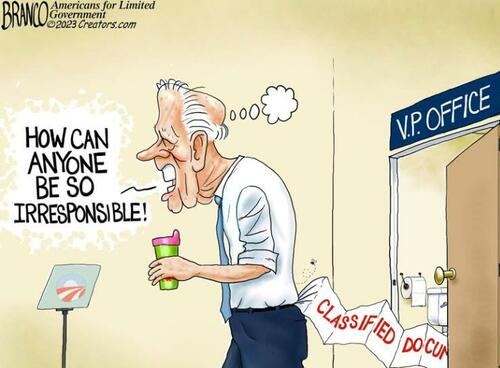 Excellent points all around.

Putting aside the repeated movement of highly classified documents over six years, one curious element has emerged in this scandal: the use of private counsel.

Not only did President Joe Biden enlist lawyers to clear out his private Washington office; he then used them — rather than security officers or the FBI — to search for additional classified documents.

The initial use of lawyers is notable. While it seems a fairly pricey moving crew, Biden could argue a trove of documents might require a judgment on where they should be sent and whether they belong to Biden, the Penn Biden Center or the government.

But why was a legal team sent in six years after Biden took the documents on leaving as vice president? Were the lawyers specifically selected because they had clearances, an acknowledgment there might be classified material unlawfully housed in the office?

After the fourth batch of documents was discovered this week (the third found in Delaware), Richard Sauber, referred to as the “special counsel to the president,” stressed that he has a clearance. Sauber admits the lawyers who found the first batch at the residence didn’t have clearances but says he found the later documents.

It remains unclear which lawyers were involved in which discoveries, whether they had clearances and (if so) at what level.

In fact, it seems to suggest Biden continued to use uncleared lawyers after his team found highly classified documents Nov. 2 in the Penn Biden office closet in Washington.

That itself could be viewed as gross mishandling of classified information.

It’s strange Biden did not use security officers or the FBI to conduct further searches. The president has a host of people who regularly handle classified material. So why use the lawyers?

The answer appears the same as in the case of Hillary Clinton’s emails: control. Using private counsel allows Biden to raise attorney-client privilege. Trump also used counsel, but eventually the FBI raided his home to search and remove not just classified material but documents found in boxes with that material.

While that attorney-client privilege can be overcome under a “crime/fraud exception,” it adds a level of initial protection. It also allowed Biden to control the discovery and initial record of the discovery of classified information.

With Mar-a-Lago, the FBI was criticized for staging documents to be shown in the storage room. The photos were then leaked to an eager media. There will be no staged photos of documents alongside Time magazine covers for Biden.

Nor were documents he housed with classified documents removed. Indeed, it’s not clear if the FBI will know what documents were stored in the same boxes.

What was potentially lost is significant. Classified documents are generally supposed to be in folders with a thick, colored border and large printed classification warnings. Were some of those folders observable before they were moved? If so, anyone could tell a pile contained classified material, including the president and passersby.

Likewise, the initial discovery could show the context of surrounding material. The FBI at Mar-a-Lago carefully photographed that context and its search. Here, we’re relying on counsel to have kept such a record when most lawyers would be reluctant to do so given the risk to their client.

The key is that unlike FBI agents, these lawyers are not acting on behalf of the public interest but for the president’s personal interests.

If there are criminal charges, the key witnesses will be lawyers representing the president as an individual. They are more likely to minimize incriminating or embarrassing elements.

And they are themselves under scrutiny. Since they may not have had sufficient clearances to do this work, it is in their interest to downplay any expectations or warnings of additional classified material scattered around Biden’s home or office.

Concern over the use of lawyers has only grown with time. Biden not only continued to have his lawyers search after the first discovery, but did so for months through subsequent discoveries.

After finding highly classified material in Biden’s garage Dec. 20, private counsel — not the FBI — found another document in an adjacent room Jan 11. Sauber found more classified documents the next day.

They raised another question. It would seem unlikely a document with a proper classified cover could be missed. The folder has thick red or yellow borders running around the edges and large black classifications like “TOP SECRET” emblazoned across the top. If that was missed, the earlier searches were clearly negligent.

Alternatively, and more concerning, the internal documents might have been removed from the folders and stored without cover. That would indicate someone removed and reviewed them — an act showing knowledge of the classified status. If they were removed at Biden’s residence, he would be the chief suspect in such use.

It would utterly destroy the “inadvertence” defense.