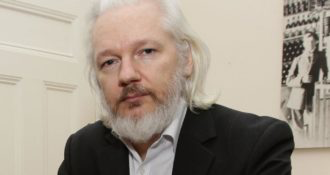 Trump has claimed that the election was a rig job and several emails released by WikiLeaks points to Clinton’s stealing the DNC nomination from Sanders. Now we have the CEO of WikiLeaks saying the same thing in an interview.

Whistleblower Julian Assange has given one of his most incendiary interviews ever in a John Pilger Special, courtesy of Dartmouth Films, in which he summarizes what can be gleaned from the tens of thousands of Clinton emails released by WikiLeaks this year.

JP: You get complaints from people saying, ‘What is WikiLeaks doing? Are they trying to put Trump in the Whitehouse?’

JA: My answer is that Trump would not be permitted to win. Why do I say that? Because he’s had every establishment off side; Trump doesn’t have one establishment, maybe with the exception of the Evangelicals, if you can call them an establishment, but banks, intelligence [agencies], arms companies… big foreign money … are all united behind Hillary Clinton, and the media as well, media owners and even journalists themselves.