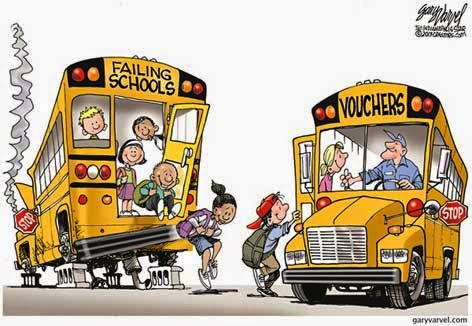 Good thing they had money. Think of the poor who cannot afford to move for their kids’ education.

Robin Lake, director of University of Washington’s Center on Reinventing Education, used to oppose vouchers, she writes on U.S. News. A strong supporter of public schools, she was concerned about “government money going to religious schools, equity issues and a sense that private schools weren’t accountable to parents in the same way public schools are.”

She changed her mind about vouchers when her son attended the neighborhood public elementary school.  He “hid under a desk every day.” His teacher ignored him.

He tested as profoundly gifted, but a constellation of emotional and social issues caused him to shut down in the classroom. . . . Our son was helped by a full-time aide and a certified assistant teacher, both kind but badly educated about how to work with him. He was lagging academically and faced being funneled into a dead-end, segregated classroom. We were desperate.

The only private schools open to special-needs students were too expensive.

. . . my husband and I started adding up the money being spent on our son, between the various aides, teachers and central office staff. If the district had given us half of what they were spending, we would have been able to afford a good private school that would work well for our son.

. . .  the district wasn’t going to give us money, not without a lawsuit. But it made me realize that I could no longer oppose vouchers on principle. If I would have gladly accepted one, how could I oppose others getting the same opportunity?

She and her husband moved to a different neighborhood and “campaigned our way into another public school” that had been giving charter-like freedom to design its own teaching approach. Their son did well, thanks to their “determination, deep knowledge of the system” — and money.

“Not all parents of the millions of children with unique talents and learning needs will be able to fight the system successfully,” concludes Lake. “Shouldn’t the burden of proof be high before we close off potential options for them?”