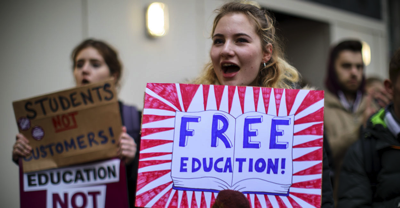 I honestly don’t think that progressives understand the meaning of the word “free.”

The Daily Signal reminds us that someone will pay for free college in New York. It is essentially a form of wealth redistribution. From the article:

New York Proposes Free College, but Not Everyone’s Buying It

New York Gov. Andrew Cuomo announced an “aggressive” new plan to provide free college tuition to families earning up to $125,000 a year. Under the proposal, nearly a million families would qualify.

“We’re making college tuition-free for middle-class families,” Cuomo, a Democrat, said. “This is the most aggressive plan ever proposed.”

Richard Vedder, director of the Center for College Affordability and Productivity and a professor of economics at Ohio University, called the proposal “extortionately inappropriate.”