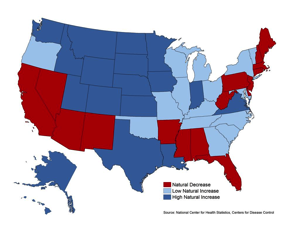 Not a great record to break.

In 2014, more white people died than were born in 17 American states, a new high, according to a new study. In 2004, four states had more white deaths than births. Researchers said the trend will likely continue given an aging white population in the US.

Non-Hispanic white deaths in states that represent 38 percent of the US population have surpassed white birth rates, according to new research by the Carsey School of Public Policy at the University of New Hampshire.

One sign of U.S. demographic change: There are now more white deaths than births in 17 states, via @CarseySchoolhttps://t.co/UgWV3VMo1Jpic.twitter.com/XB0Sf1cv4Y

“The fact that this was going on in states that contain such a substantial part of the U.S. population stunned even me,” Kenneth Johnson, co-author of the study and a senior demographer and sociology professor at the University of New Hampshire, told the Wall Street Journal. “We’re probably going to see it in several more states” in the years ahead, he added.