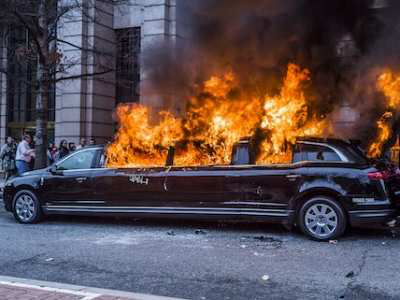 As I said before: the progressives are pushing hard for a 2nd term for Trump.

A lot of people experience a sense of visceral joy when someone they hate gets punched in the face. But there’s a body of social science research that suggests they won’t like the long-term public policy results.

Over inauguration weekend, a member of the black bloc—a group of masked anti-Trump insurrectionaries—punched white nationalist leader Richard Spencer in the face on the streets of Washington, D.C. Elsewhere, black bloc members smashed the windows of a local Starbucks and Bank of America, even though neither company could be properly characterized as pro-Trump. (Starbucks’ CEO endorsed Clinton, and Bank of America gave Clinton more money than Trump.) They set a limousine on fire, even though the limousine belonged to a Muslim immigrant.

When it comes to enacting social change, are broken windows and displaced limousine drivers merely the cost of doing business? No. In fact, violent and destructive protesting is less efficient than nonviolent protesting, according to the research.

“Why Civil Resistance Works,” a study written by Maria J. Stephan and Erica Chenoweth, found that nonviolent tactics were much more effective than violent tactics. Researchers surveyed anti-governmental resistance movements in the 20th century in a variety of countries: nonviolent means achieved their aims 53 percent of the time, while the violent means worked only 26 percent of the time.

“Whereas governments easily justify violent counterattacks against armed insurgents, regime violence against nonviolent movements is more likely to backfire against the regime,” wrote the authors. “Potentially sympathetic publics perceive violent militants as having maximalist or extremist goals beyond accommodation, but they perceive nonviolent resistance groups as less extreme, thereby enhancing their appeal and facilitating the extraction of concessions through bargaining.”