You will notice the precipitous decline in newspaper jobs coincides with the rise in the internet.

Who needs to pay for paper advertising when you have Craig’s List? And how else will papers make an income? Off of sales? Only the Baby Boomers are buying papers, and they are dying out. 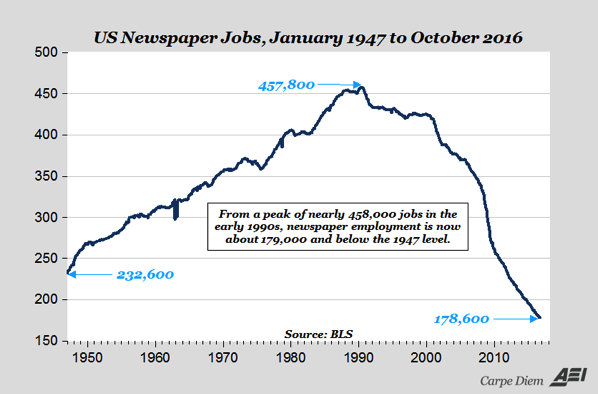 Chart of the Day III (above) displays an update of an economic trend I’ve been following — the ongoing free-fall collapse of US newspaper jobs, which have fallen from a peak of nearly 458,000 in 1990 to below 179,000 in October of this year — and that’s 23% (and 54,000 jobs) below the level in 1947. The newspaper industry can expect more of Hurricane Joseph Schumpter’s forceful gales of creative destruction in the future….