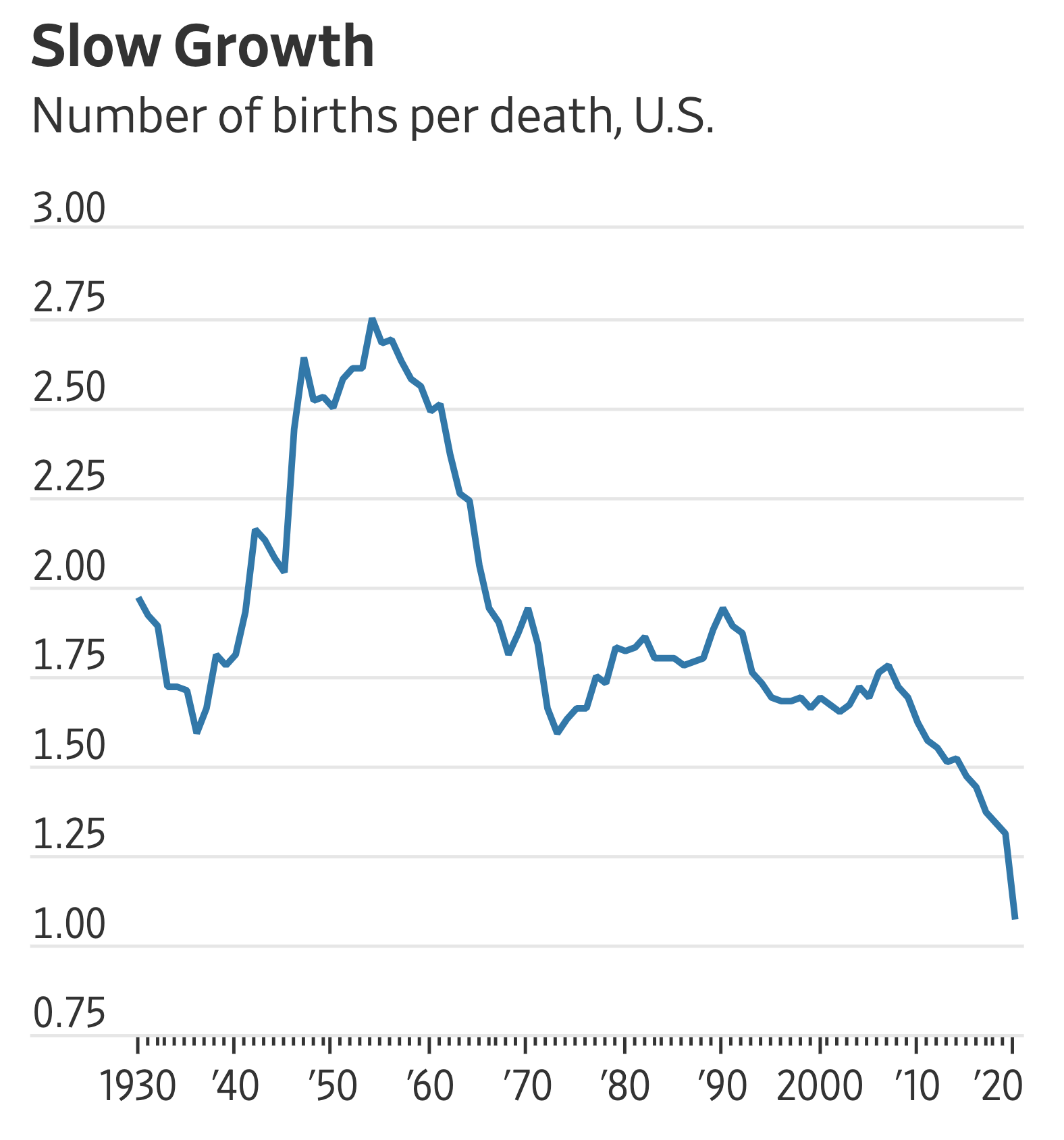 From the WSJ, with a shoutout to Emsi.

Among the industries most affected are retail and hospitality, because they rely on younger workers who turn over quickly, said Rob Sentz, who until last month was chief innovation officer at the labor-market data firm Emsi. Sectors such as healthcare, engineering and information technology will struggle to replace senior management as millions of baby boomers retire.

U.S. Population Growth, an Economic Driver, Grinds to a Halt

America’s weak population growth, already held back by a decadelong fertility slump, is dropping closer to zero because of the Covid-19 pandemic.

In half of all states last year, more people died than were born, up from five states in 2019. Early estimates show the total U.S. population grew 0.35% for the year ended July 1, 2020, the lowest ever documented, and growth is expected to remain near flat this year.

Some demographers cite an outside chance the population could shrink for the first time on record. Population growth is an important influence on the size of the labor market and a country’s fiscal and economic strength.

rs is that in the past, when a weak economy drove down births, it was often a temporary phenomenon that reversed once the economy bounced back.

Yet after births peaked in 2007, they never rebounded from the nearly two-year recession that followed, even though Americans enjoyed a subsequent decade of economic growth. 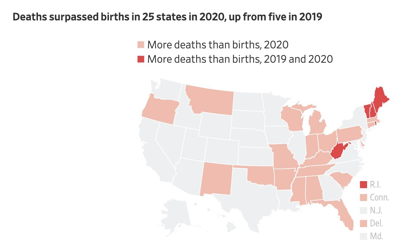 This year, the U.S. will record at least 300,000 fewer births because the uncertain economy and the pandemic dissuaded women from having babies, according to projections by economists Melissa S. Kearney and Phillip Levine. Provisional government data already show births in the first three months of 2021 declined compared with 2020.

The longer-term decline stems from millennials having fewer children. Extended financial insecurity among young adults and women’s rising educational attainment are among factors overlapping with the pandemic year’s health and financial shocks, many demographers say.

A sharp rise in drug-overdose deaths and an increase in fatalities from homicides and some chronic diseases last year helped drive down U.S. life expectancy by 1.5 years, the largest drop since at least World War II.

There were more deaths than births in about 55% of U.S. counties for the year ended June 30, 2020, census figures show, up from about 37% of counties at the start of the previous decade.

Before the pandemic, in 2019, only a handful of states ended the year with a deaths surplus: West Virginia, Maine, New Hampshire, Rhode Island and Vermont. Now the states where deaths exceed births are all over the U.S., from Wisconsin and Michigan to South Carolina and Florida to Montana and Oregon, according to provisional data from the National Center for Health Statistics at the Centers for Disease Control and Prevention.

Over time, a lower fertility rate will lead to a higher ratio of retired beneficiaries to taxpaying workers, which is expected to raise the cost of Social Security and Medicare.

The Biden administration hopes to support family growth through its proposed $1.8 trillion American Families Plan, which includes paid parental leave, subsidized child-care and free preschool. Such policy approaches have had a mixed record of lifting fertility rates in other countries, researchers say.