This is actually good news. Nearly a third can think for themselves and are not taking marching orders from their leaders.

This morning, Fox tweeted the results of a new Gallup poll on how people view the attack that took place on Pulse nightclub in Orlando, Florida last Sunday. While your initial reaction, like mine, might be to just throw your hands up in disgust and seek out the Sweet Meteor of Death, there is actually some good news here. 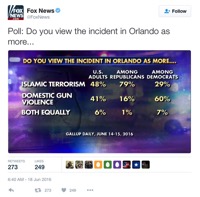