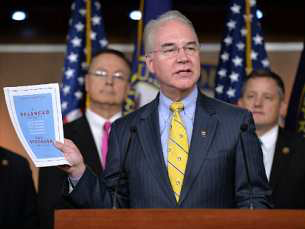 President-elect Donald Trump has picked Georgia doctor and House Representative Tom Price as his Secretary of Health and Human Services (HHS). Price is an ardent critic of Obamacare, and also the author of one of the most detailed plans to replace the health care law. Since winning the election, Trump has appeared to waver on his promise to completely repeal the health care law, saying he might consider retaining certain provisions.

His choice of Price to oversee the sprawling federal health care apparatus is the strongest signal yet that the incoming president is firmly committed to opposing Obamacare—but it does not by itself guarantee that Republicans, who have long been wary of uniting around legislative specifics, will repeal or replace the health care law. And, along with a second pick to manage Medicare and Medicaid, it raises the possibility that Republicans will simply use the federal health bureaucracy to reward favored constituencies.

Aside from his consistent opposition to Obamacare, the most notable thing about Price is his own health care alternative. Unlike a lot of Obamacare critics in Congress, Price understands that on health policy, the details matter. When I interviewed him in 2013 about Republicans and health policy, he lamented the GOP habit of simply saying that Obamacare is bad law and declining to offer solutions of their own, and seemed frustrated by the lack of attention to particulars.

“Health care is complex,” he told me at the time. “Most individuals kind of have their topline talking points. But if they’re asked any questions beneath that veneer about the practicality or logistics of providing care and the consequences of whatever system you’re recommending, it becomes very difficult to answer any of those questions in a normal talking-points kind of language…Once you drill down a bit, people become a bit uncomfortable.”

Price, in contrast, has actually drilled down, a sign of his seriousness about tackling the challenges of U.S. health care policy. Many of the Republican replacement plans take the form of statements of principle or white papers. Price’s plan, on the other hand, already exists in legislative form, as a 250-page bill known as the Empowering Patients First Act. The plan offers a level of detail that allows you to better imagine how it might work, and what sort of trade-offs it might entail.