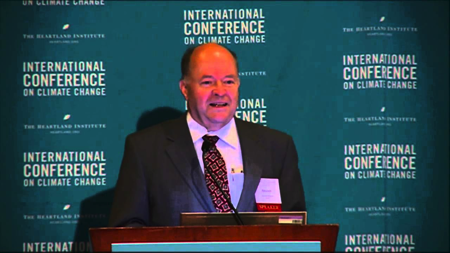 President Donald Trump is taking aim at one of the federal government’s main agencies for climate change research – the National Oceanic and Atmospheric Administration – and NOAA employees are girding for drastic changes in how they conduct science and report it to the public.
>

Trump has appointed a leading denier of climate change, Kenneth Haapala of the Heartland Institute, to serve on the administration team handling appointments for the U.S. Department of Commerce, the federal agency that oversees NOAA. Haapala will be in a position to help choose top administrators at NOAA, an agency that conducts atmospheric research and, among other duties, also oversees the National Weather Service and the National Marine Fisheries Service.

One NOAA employee said he and many of his colleagues are alarmed by Haapala’s selection.

Haapala heads the Science and Environmental Policy Project, which, among other things, hands out an “April Fool’s Award” to the government official whom it judges had expanded government power through “flimsy”science. The group handed out the first such award in 2012, giving it to Lisa Jackson, who served as EPA administrator during the Obama administration.

An economic modeler, Haapala has little love for federal environmental agencies. In a 2015 videotaped speech, he accused 13 government entities of “selective ignorance” for a report they’d drafted on the potential health impacts of climate change.

Haapala’s transition role in the Commerce Department has caught the attention of some Democrats in Congress. Last week, Sen. Sheldon Whitehouse of Rhode Island and Arizona Rep. Raul Grijalva, the senior Democrat on the House Natural Resources Committee, wrote a letter to Trump regarding Haapala’s appointment.

“We urge you to remove Mr. Haapala and any others who share his discredited views on climate science from the DOC landing team,” the two congressmen wrote. “He certainly does not understand or appreciate NOAA’s mission and therefore is unfit to serve in any capacity that oversees operations or personnel decisions at the agency.”

Neither the White House nor Haapala could be reached directly for comment Monday. But in a newsletter he continues to write, Haapala disputed the assertion by the two congressmen that he “has made a career out of denying the science behind climate change.”

Writing about himself in the third person, Haapala went on to explain how, as a non-scientist, his views on climate change and other issues have evolved.

“A great influence on Haapala’s willingness to question conventional thinking are the writings of Bertrand Russell, a British philosopher and mathematician,” he wrote. “With no advanced degree in natural sciences, Russell wrote very clearly on many scientific issues of the day.”

Calling itself the nation’s “environmental intelligence agency,” NOAA has a $5.8 billion annual budget, with roughly $190 million targeted toward climate change research. It operates several orbiting satellites to collect data on the atmosphere and earth sciences. Before Trump took office, it released a report declaring 2016 to be the warmest year on record globally, following two other record years.
Story Via McClatchyDC.com