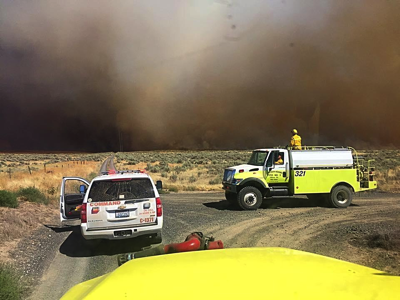 This is what’s causing all of our smoke in Moscow.

In Grant County, the Black Rock fire started around noon Saturday and burned more than 23,000 acres north of Moses Lake.

The blaze has burned about 23,600 acres and was about 40 percent contained as of Sunday afternoon, according to the Northeast Washington Interagency Incident Management Team.

No evacuation orders are currently in place, but the fire is threatening 25 homes, as well as crops, livestock and sage grouse habitat, the release said. 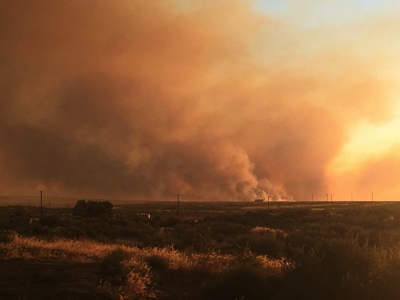 A command post has been set up at Odessa High School, and members of the school’s Future Business Leaders of America chapter made dinner and breakfast for firefighters, Odessa resident Gina Schlomer said.

A third wildfire in Columbia County, near Dayton, Washington, is mostly contained after initially threatening 125 homes.

The North Touchet fire started Saturday around 5 p.m., according to a news release from the State Fire Marshal’s Office.

It was initially estimated to be 700 acres, the release said, but Columbia County Fire District 3 spokesman Dwight Robanske said Sunday the size was closer to 550 acres. He said the fire was about 80 percent contained as of Sunday morning.

Robanske said about 15 homes are still threatened by the fire, but residents have been allowed to return home. Threatened homes remain under Level 1 evacuation.

The cause of the fire is under investigation. The Walla Walla Union-Bulletin reportedinvestigators believe it may have started when a resident cutting brush hit a rock, causing a spark.