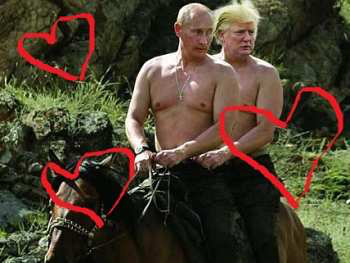 I really don’t want to follow this story. But it’s making such headlines that you should know about it.

If you’ve ever wondered why the news media is treated with derision and distrust, today is your lucky day.

Buzzfeed has published a “dossier” of unclear provenance that says President-elect Donald Trump is a pervert who is being blackmailed by Russian agents who have compromising material about his sexual kinks.

Sensational, provocative, insane, scatological (urological?), incredible—the dossier is all that and more. Read about how Trump supposedly insisted on staying in a hotel room used by President Barack Obama and First Lady Michelle Obama and hired prostitutes to urinate on the bed. Yes, it’s that level of report.

And it’s all horseshit, if you believe Buzzfeed’s own intro to the material, which stresses that we’re talking about “explosive — but unverified — allegations.” Worse still from a journalistic perspective is this sort of phony-baloney gesture that insulates the publisher evens as it distances any truth claims:

Now BuzzFeed News is publishing the full document so that Americans can make up their own minds about allegations about the president-elect that have circulated at the highest levels of the US government.

I like Wikileaks and other forms of forced transparency, but we shouldn’t confuse what Buzzfeed is up to here with that, or with journalism. There’s no reason to believe that the material is in any way accurate or meaningful, other than as opposition research that circulated among various government agencies and media outlets, all of whom passed on it because it reeks not of urine but of falsity. Here’s what Buzzfeed honcho Ben Smith tweeted about this all:

Here’s the note I sent to @buzzfeednews staff this evening