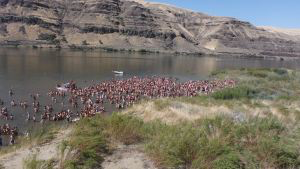 There will be a strong police presence on the Snake River this weekend patrolling popular party spots for returning college students. Twice in the past 4 years a massive crowd of Washington State University students trashed the Dunes near Lower Granite Dam. The US Army Corps of Engineers had to shut down the Dunes following the incidents to clean up the mess. Through Labor Day the Corps will be teaming up with the Whitman and Garfield County Sheriff’s Offices, Washington Fish and Wildlife, the state patrol and WSU Police for weekend patrols on the river. The officers will focus on the Dunes South of Colfax and Granite Point outside Pullman. The corps wants to remind college students that jumping off what the students call “The Cliffs” is illegal. Parking at the Dunes is restricted to the 2 lots near the site. Glass containers are not allowed at the Dunes and fireworks are prohibited.