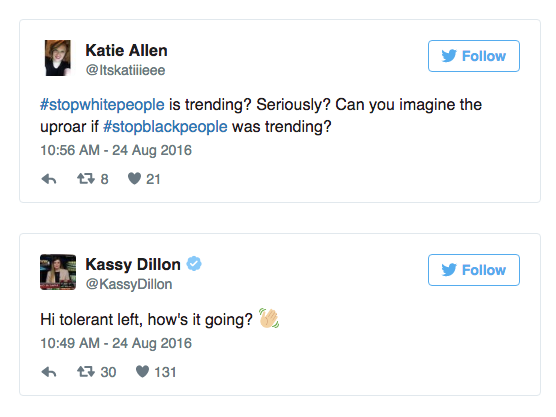 As part of their resident advisor training program, the State University of new York at Binghamton had a race relations seminar called #StopWhitePeople2K16. The goal of the training program, as Binghamton University has said, was to “facilitate a discussion among the RAs that would improve their ability to handle conflicts among residents around issues of diversity.” The name of the seminar (from which the alt-right ire has stemmed) isn’t actually a Binghamton invention. Note the dates on these tweets.

White people activities: Olympic parties,dabbing&bragging about being back to back World War champs #StopWhitePeople pic.twitter.com/uOGvlXfZPi

But as soon as the seminar was announced, #StopWhitePeople started trending pretty much immediately, mostly with comments like this one:

Seriously, how to “stopwhitepeople” not racist to teach to college RAs? https://t.co/PvE9t50qKx

Explaining systemic racism isn’t the goal of this article. This controversy is for the most part just the #BlackLivesMatter/#AllLivesMatter argument with different window dressing.

Its funny how many white folks look at #StopWhitePeople and try to claim reverse racism yet can’t understand actual racism.

The argument against Binghamton U’s #stopwhitepeople RA course “what if it was stop black people!”…UH, WE DO, AND HAVE, FOR CENTURIES.

What these tweets missed was that the hashtag that the seminar was highlighting was used mostly ironically to call out cultural appropriation. Was it a great name for a seminar? Up for debate. But racist, that it ain’t.