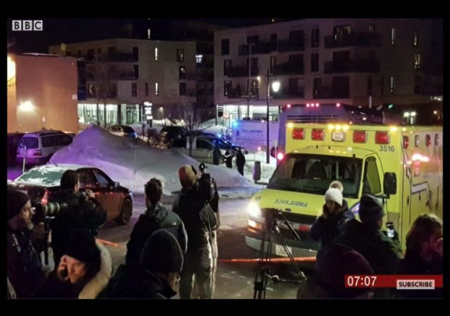 And it wasn’t some white cracker either.

Police have identified the men as Mohamed Khadir and Alexandre Bissonnette.

Witnesses and media said one of the gunmen shouted “Allahu akbar!” as they both opened fire on the mosque.

The shooting occurred at 8PM on Sunday night “when between 50 and 200 worshippers were in the building” for evening prayers.

“It was with tremendous shock, sadness and anger that I heard of this evening’s tragic and fatal shooting at the Centre culturel islamique de Quebec located in the Ste-Foy neighborhood of the city of Quebec,” Trudeau said in a statement. “Muslim-Canadians are an important part of our national fabric, and these senseless acts have no place in our communities, cities and country.”