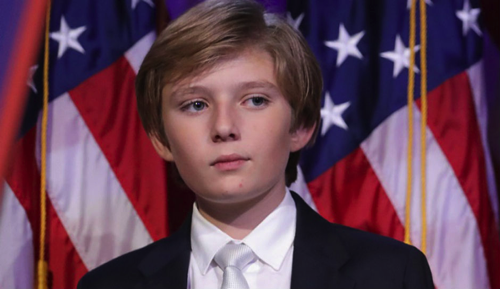 Can you just imagine the blowback if the media had said this about Obama’s daughters at any point during the last 8 years?

Ten-year old Barron Trump, Trump’s youngest son and the first boy in the White House since JFK Jr. was shamelessly called both a “rapist” and a “school shooter” by left-wing writers and comedians on Twitter over the course of weekend. This attacks comes after Rosie O’Donnell made an unsubstantiated claim that Barron Trump was “autistic” during Trump’s campaign.

On Friday, “Saturday Night Live” writer Katie Rich tweeted: “Barron will be this country’s first homeschool shooter.” Ms. Rich later deleted her tweet as well as her account, but there has been no apology from either her or NBC. Rich’s credits were suspiciously absent from the most recent episode of SNL, leading some to speculate (or hope) that she was fired.[intermarkets_ad]

Comedy Central writer Stephen Spinola somehow managed to top Rich’s maligning, writing that Barron Trump “looks like a very handsome date-rapist to be”. Spinola deleted his tweet but not his account; he has not apologized nor has Comedy Central. Apparently, rape jokes are fine with the left when they attack innocent children.