It seems lost on the progressives that the Nazis used violence to silence other from speaking. The progressives have become that which they supposedly hate. 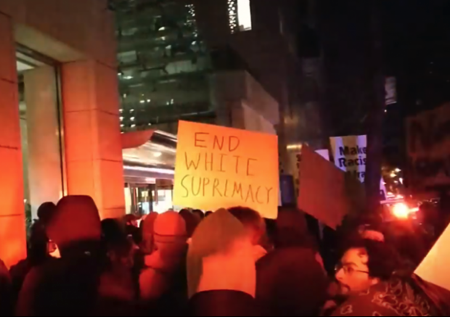 McInnes, who left Vice in 2008, had been scheduled to talk to the NYU College Republicans at 7 p.m., and was later spotted on Periscope live video speaking at the podium and shouting at protesters, who managed to make it inside the venue.

“Whose campus? Our campus!” demonstrators yelled as McInnes attempted to speak.

“Why are you repeating the same nonsense over and over?” McInnes asked at one point, before riling up the protesters even more.

After a few more minutes of back-and-forth, the controversial comedian appeared to end his speech early — telling an NYU spokesperson, “You’re a dumb liberal asshole” and “You think these are rational beings” — before storming away, NYU Local reports.

“Gavin has left the podium, doesn’t intend to come back,” the news source tweeted. “Leaves with aforementioned scathing remark to University spokesman.”

McInnes almost didn’t even make it inside on Thursday night, on account of the “antifa” protesters rushing him at the entrance, according to Gizmodo reporter Anna Merlan.

“Cops shoved them back, took a guy to the ground,” she tweeted. “Guy in a MAGA hat threw a punch.” 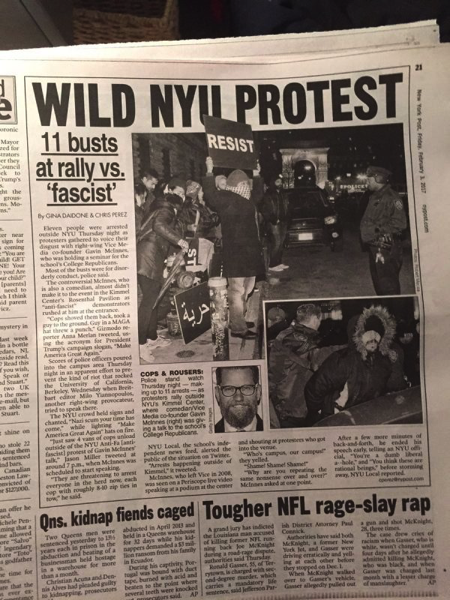