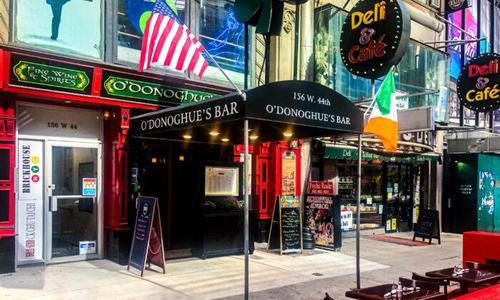 Pre-pandemic, O’Donoghue’s Pub and Restaurant was a successful business that has been open for 10 years in Times Square, Manhattan. Fergal Burke, the owner of O’Donoghue’s noticed that his business has seen “a massive drop,” since the vaccine mandate came into effect.

“We don’t have the money here to survive without the help of our landlord, [who] has been very supportive and has been giving us breaks on the rent, but without our landlord, we would not be in business,” Burke told The Epoch Times. He said that he needed to hire another person to be at the door checking for vaccination proof, which increased his expenses.

Comparing the clientele from pre-mandate to when it kicked in about two weeks ago, “Our business is definitely down 50, I’m going to say 60 percent,” Burke said with a somewhat downhearted tone. “There’s just not people coming into the restaurant, they have the fear of being asked for vaccines.”

Burke and his staff have had to refuse a lot of customers for not having the passes.

NYC Restaurateurs: Business Down 40-60% Due To Vaccine Mandate | ZeroHedge