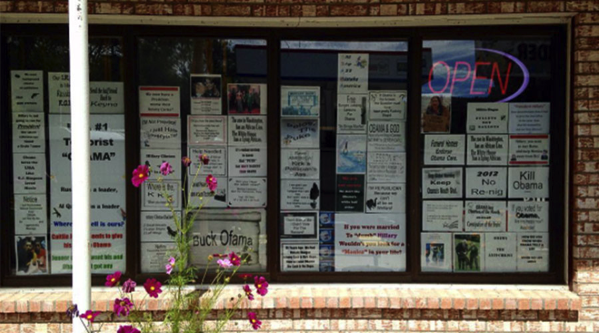 Progressives are coming unglued. I wonder if they would be yelling censorship if these were anti-Trump slogans.

A convenience store in Mayhill, New Mexico has sparked outrage online for displaying racist, xenophobic and anti-Muslim signs in its store front window while also generating huge debate about the limits of the first amendment right to free speech.

According to former employee of the Mayhill Convenience store, Marlon McWilliams, the signs have, “been here a long time.”

“He sells those signs to people who come through and stop and read them,” McWilliams told local news outlet KOB4.

No controversial topic is left untouched, with references to abortion, the Clintons, the welfare state and Muslims. A number of celebrity call-outs have also been spotted among the many signs posted on the window, from Colin Kaepernick to President Obama, who features heavily among the signs. “Obama loves the USA like O.J. Simpson loved Nicole,” reads one sign, while another references “dumb Hillary.”

“Obama & other Muslims not welcome here,” reads another poster seen hanging on a door window.

The store also sells Obama toilet paper for a whopping $9.50 plus tax.

Wow, is the owner of Mayhill convenience store even being investigated by the @SecretService ? Note sign” Kill #Obama-care- #NewMexico @FBI

From breaking news and entertainment to sports and politics, get the full story with all the live commentary.