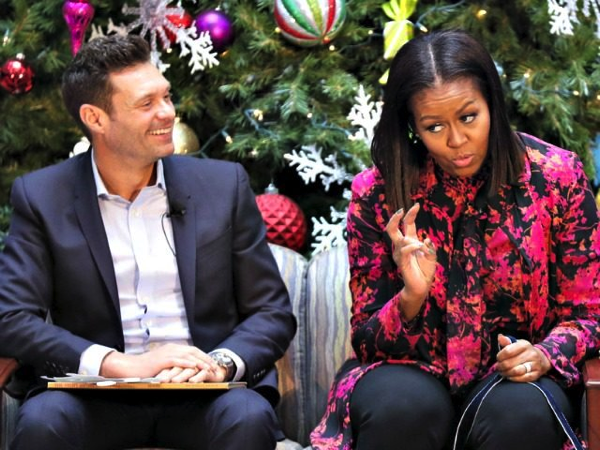 First Lady Michelle Obama and TV/Radio host Ryan Seacrest experienced several uncomfortable moments while reading the classic Christmas tale The Night Before Christmas to a group of children at the heart and kidney unit at Children National Health Center in Washington, D.C. on Monday.

“Twas the night before Christmas when all through the house, not a creature was stirring, not even a mouse,” the classic tale began, with Mrs. Obama reading the opening line. She and Seacrest would take turns reading sentences from the story.

After reading the line, “The stump of a pipe he held tight in his teeth,” she told the kids, “I think St. Nick gave up smoking. This was a long time back,” according to CNS News.

In 2011, the first lady said her husband, President Barack Obama — who has been a smoker for several years — had quit smoking for good in 2011. This statement was followed up, in 2013, with Obama telling a United Nations official into a hot mic that he hadn’t had a cigarette in “probably six years” because “I’m scared of my wife.”

Seacrest reportedly echoed the first lady’s sentiment and throwback to the past saying, “This was written way back in the day.”

Then, Seacrest read the line about Santa’s “little round belly that shook when he laughed like a bowl full of jelly,” which he followed up with, “I mean this as a compliment,” before reading the line, “He was chubby and plump (laughter) — a right jolly old elf, and I laughed when I saw him in spite of myself.”

The visit to the children’s hospital is just one of many appearances Michelle Obama has made and will make over the holiday season and leading up to her husband’s transition of power to President-elect Donald Trump.

During a pre-taped interview with Oprah Winfrey to air on CBS Monday at 8 p.m., Michelle expressed that she felt that the “hope” her husband had campaigned on has been lost with the new Donald Trump White House. “We feel the difference now. See, now, we are feeling what not having hope feels like,” she said, according to the New York Post.

She added, “Hey, it’s going to be OK. Let’s remember the good things that we have.”

Today, the First Lady and @RyanSeacrest celebrate the holidays at @ChildrensHealth. ? Join us on @Snapchat: michelleobama ?? https://t.co/5fFUAV4ojR