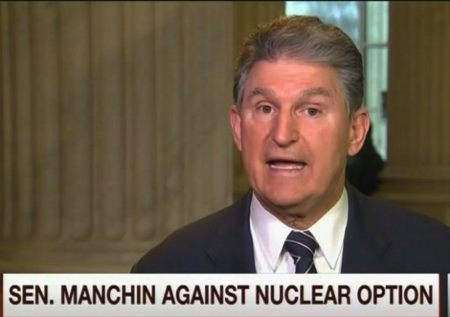 The Dems brought this upon themselves.

Did Joe Manchin just open the door for Republicans to invoke the nuclear option if necessary to confirm Neil Gorsuch to the Supreme Court? In appearances on CNN and MSNBC this morning, Dem Senator Manchin blasted his fellow Dems for having invoked the nuclear option in the first place.

Said Manchin on Morning Joe: “I’ve been opposed to the nuclear option. I thought Harry Reid was dead wrong when he did it. I voted against that. My dear beloved senator, prior to my coming here, was Robert C. Byrd and he would be rolling over in his grave knowing what we have done.” That could be understood to mean: Dems, if the Republicans now use the nuclear option to confirm Gorsuch, you’ve got no one to blame but yourselves for having opened Pandora’s Box.