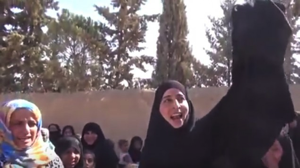 In terror group’s former stronghold of Manbij, one cheering woman shouts as she sets veil alight: ‘To hell with whoever invented this thing’

She better hope they don’t find her. She won’t be in a burqas; she’ll be stoned to death in a pit.

In scenes of joy from a Syrian city liberated from Islamic State occupation in recent days, residents of Manbij were seen celebrating in the streets, with women burning burqas — full-body coverings, which also hide the face — and men cutting beards that had been mandated by their rulers.

“To hell with whoever invented this thing,” one woman cried as she held a lighter to a black robe, in a video obtained by the Middle East Media Research Institute. “They stifled us in this. Let them wear it themselves.”

IS imposes a harsh and extreme version of Islam on the territory under its control, including a mandatory dress code. Under the extremists’ reign, women had to wear long black cloaks that covered all but their eyes, while all adult men were forced to grow beards. Smoking was banned.

The woman herself was draped in an abaya, covering her entire body except for her face.

Children and other women around her clapped and cheered as the cloth began smoking. “This will be the fate of Daesh,” a man interjected, using another name for IS.

The last remaining IS fighters abandoned the city of Manbij near the Turkish border on Friday after a rout the Pentagon said showed the extremists were “on the ropes.” The retreat from the city which IS captured in 2014 was the jihadists’ worst defeat yet at the hands of the Syrian Democratic Forces (SDF), an Arab-Kurdish alliance backed by US air power.

In the street celebration, another woman wearing a red head covering helped the first hold the burning robe aloft.