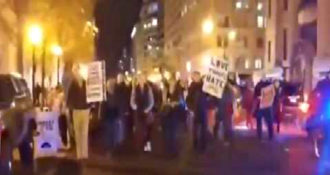 Roger Stone was one of Donald Trump’s first outspoken and effective mouthpieces during the presidential campaign; he’s also one of the more… interesting characters on the American politics scene. For all of his “colorfulness,” Stone has deep connections in Washington, D.C. and in the media establishment, and he is currently using those connections to protect the Trump administration from a false start.

Stone recently explained that he had uncovered a liberal plan to disrupt the coming inauguration through protest and violence. One of his “operatives” has infiltrated a liberal organization calling itself the J-20 Committee and discovered their nefarious plans for Inauguration Day.

I do want to talk about what is coming in Washington, because it is scary.

We had an operative who infiltrated the J-20 Committee planning session. And let me go through what these folks have in mind, because this is not a benign civilly disobedient protest.

They intend to march from McPherson Square to Columbus [Circle]. They are going to march during the lunch period immediately after the inauguration — approximately 12:30. Their goal is to “create a sense of crisis.”

They are going to harass inaugural visitors as they step off the metro stations. Multiple waves will harass Secret Service checkpoints on the National Mall.

Roving protesters in the crowd will be using drums to break up the program, they are going to launch a pirate radio broadcast.

Drones loaded with rockets to attack the parade are under consideration.

Secret Service take notice — Happy to share this with anyone from the service who takes notice.

They are going to have roller derby women zooming through the crowd knocking people over and disturbing order.

Now, January 6-8, they have street medical training. January 8, they have their next meeting to plan this disruption. January 14, they are going to be training their shock troops for violence. January 14-22, they converge on Washington in an effort to paralyze the city.

Chinatown and K Street nonprofits have been opened for legal and medical assistance. Those are front organizations. And the affiliated groups here are: Rising Tide North America… Showing up For Racial Justice, and of course the ever-popular Black Lives Matter.

This is the blueprint for disruption, the Alinsky plan. You are hearing about it here on Infowars…

So, we have our own event on January 20 — The Deploraball. Now moved to a much better venue, the National Press Club. This is going to be the non-elite gathering for activists.