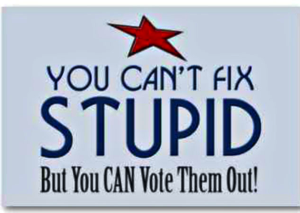 MSNBC’s Joy Reid “went on NBC’s Meet the Press and insulted the public claiming they were too stupid to understand Hillary’s” email trail of corruption. According to Reid, “‘The curse for [Hillary] is that trying to explain it, her answers are so detailed and complicated, that when you explain you’re losing,’ she explained to the panel.” (Source)

This is on purpose. Make it sound complicated when it’s not.

For example, the general liberal public believes that taking money from some people and giving it to other people is a form of compassion. A constitutional conservative knows that such political shenanigans is a form of theft and ends up creating more unemployed people and slaves-to-the-State voters for the Democrat Party.

You see, a politician can’t be compassionate with other people’s money. Moreover, taxing people has never created a single job unless it’s a government job. Taking money from productive people means that productive people no longer have that money to spend, employ people, grow a business, invest, or lend.

Here’s how I would have explained Hillary’s email scandal. Looking into the camera, I would have said the following:

“First, if you or I had worked for the government and did what Hillary Clinton did, we would be in jail.

“Second, if a Republican had done what Hillary had done, that Republican would be wearing an orange jumpsuit at this very moment. That’s all you need to know about Hillary’s email scandal.”

It’s not any more complicated than how I’ve explained it.