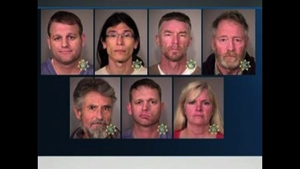 Marshals take down defense attorney after his outburst. Via the AP:

A jury delivered an extraordinary blow to the government Thursday in a long-running battle over the use of public lands when it acquitted all seven defendants involved in the armed occupation of a national wildlife refuge in rural southeastern Oregon.

Tumult erupted in the courtroom after the verdicts were read when an attorney for group leader Ammon Bundy demanded his client be immediately released, repeatedly yelling at the judge. U.S. marshals tackled attorney Marcus Mumford to the ground, used a stun gun on him several times and arrested him.

U.S. District Judge Anna Brown said she could not release Bundy because he still faces charges in Nevada stemming from an armed standoff at his father Cliven Bundy’s ranch two years ago.

The Portland jury acquitted Bundy, his brother Ryan Bundy and five others of conspiring to impede federal workers from their jobs at the Malheur National Wildlife Refuge, 300 miles southeast of Portland.

Even attorneys for the defendants were surprised by the acquittals.

Said defendant Neil Wampler: “This is a tremendous victory for rural America and it is a well-deserved, overwhelming defeat for a corrupt and predatory federal government.”